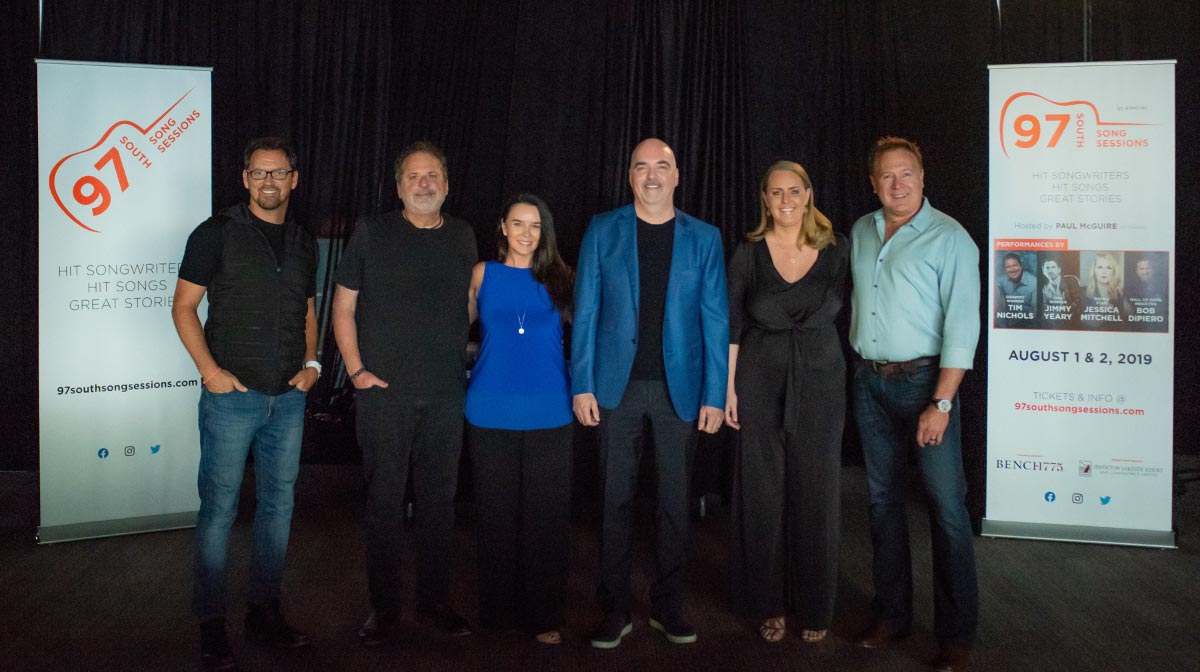 The first annual 97 South Song Sessions, held over two nights in the idyllic setting of British Columbia’s Okanagan Valley wine region at Bench 1775 winery and the Penticton Lakeside Resort and Conference Centre, was the successful preview of what is envisioned to be a greatly-expanded event in 2020. Plans include the promotion of eight to ten shows in multiple venues across the region featuring songwriters from all genres of music. The intent is to establish the area as a prime international music/wine tourism destination and as a centre for the celebration of the art of songwriting and story-telling.

Founded and organized by 97 South Inc. principals, Robin and Robert Ott, founder and former CEO of ole, one of the world’s biggest music companies, this year’s 97 South Song Sessions featured three spectacularly-successful veterans of the Nashville songwriting community and one of Canada’s fast-rising stars: Grammy-winner Tim Nichols (Live Like You Were Dying, Tim McGraw); CMA Country Song of the Year Award-winner Jimmy Yeary (I Drive Your Truck, Lee Brice); Nashville Songwriters Hall of Fame inductee Bob DiPiero (writer of 15 number one hits for a who’s who of country artists) and Canadian singer/​songwriter Jessica Mitchell, whose song Workin’ On Whiskey, recorded by Trisha Yearwood (featuring Kelly Clarkson), is the current release from Trisha’s upcoming album, Every Girl.

“In its inaugural year, 97 South Song Sessions was a showcase to introduce folks in the Okanagan Valley to the idea of featuring songwriters in concert performing their hit songs and sharing behind-the-scenes stories of how they were created,” explains Robert Ott, whose fascination with the process of songwriting dates back to his youth and led to a career path as champion of song creators through his stint as VP/GM of BMG Music Publishing Canada and his 14 years as head of his own multi-Grammy Award-winning music publishing and rights management company.

“It’s very difficult to explain how emotionally-charged and magical these events are to somebody who has not experienced them before. It was gratifying to see that the people knew by the end of each night that they had been involved in something special. That sentiment seemed to extend to the songwriters who marveled at the setting and the intimacy of the event.”

The Otts have had a property on the Naramata Bench area near Penticton, British Columbia for almost a decade and have watched it develop and transition from orchards to a wine-growing community. “There are now more than 200 wineries of the 280-plus total in B.C. between Vernon and Osoyoos in this area along highway 97 South that joins the entire Okanagan Valley together; there are likely 30 wineries on the Naramata Bench alone,” says Robert Ott. “As we saw this economy developing and the Okanagan Valley emerging as an international wine destination, it became apparent that there wasn’t a lot of entertainment that was a fit for the burgeoning luxury market. Having experienced songwriter festivals in other cities like Nashville, Key West, Florida and the Napa Valley, we understood that a cultural experience pairing the art forms of song story-telling and wine-making would be a perfect union.”

In the last two to three years in the region, there has been a real rise in the emergence of theatres and cultural spaces, the extent of which you normally see in larger centres and not in small towns like Penticton, which has a population of about 37,000 at this point.

“That’s something that we also want to support and encourage with 97 South Song Sessions so we’ll be looking at doing shows in those kinds of venues to support and bring attention to them,” states Robert Ott. “A festival like this has a wide range of benefits for the region. It will eventually bring people from around the world to the Okanagan Valley to experience the great wine-making that we have in this area, which is gradually becoming Napa Valley north. It is introducing people to the craft of songwriting and allows people a view of how things really work behind the scenes with the creation of music and the people who often write the songs that are the soundtrack of everyone’s life. They often practice their craft in solitude and seldom get any recognition for it, yet their songs affect people’s lives in a profound way. I see our festival as a bit of a lightning rod culturally in bringing the wine-making and entertainment industries, the art world and tourism together in a meeting place which is undoubtedly one of the most beautiful places on earth.”